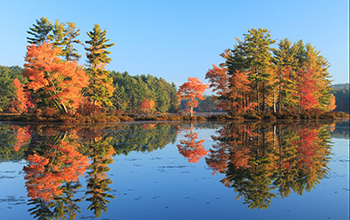 Climate change has increased the productivity of forests, according to a new study that synthesizes hundreds of thousands of carbon observations collected over the last quarter-century. The research was conducted at the U.S. National Science Foundation-supported Harvard Forest Long-Term Ecological Research Site, one of the most intensively studied forests in the world.

The study, published in Ecological Monographs, reveals that the rate at which carbon is captured from the atmosphere at Harvard Forest nearly doubled between 1992 and 2015.

The scientists attribute much of the increase in storage capacity to the growth of 100-year-old oak trees, still vigorously rebounding from colonial-era land clearing, intensive timber harvest, and a 1938 hurricane — and bolstered more recently by increasing temperatures and a longer growing season due to climate change.

Trees have also been growing faster as a result of regional increases in precipitation and atmospheric carbon dioxide, and forest stress has been reduced by decreases in atmospheric pollutants such as ozone, sulfur and nitrogen.

“It is remarkable that changes in climate and atmospheric chemistry in our own lifetimes have accelerated the rate at which forests are capturing carbon dioxide from the atmosphere,” says Adrien Finzi, an ecologist at Boston University and a co-lead author of the study.

Carbon measurements taken in air, soil, water, and trees are notoriously difficult to reconcile, in part because of the different timescales on which the processes operate. But when viewed together, a nearly complete carbon budget emerges, documenting the flow of carbon through the forest in a complex, multi-decadal circuit.

The trees show no signs of slowing their growth even as they come into their second century of life. But the scientists note that what we see today may not be the forest’s future. “It’s possible that other forest development processes like tree age may dampen or reverse the pattern we’ve observed,” says Finzi.

Adds Doug Levey, a program director in NSF’s Division of Environmental Biology, “This study reminds us that large trees, although stately and seemingly impervious to environmental change, are highly responsive to everything going on around them.”