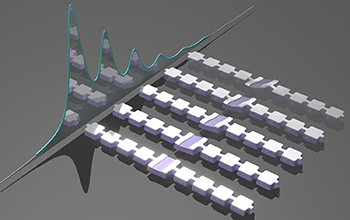 Physicists have developed a “quantum microphone” so sensitive it can measure individual particles of sound, called phonons.

The device, developed through U.S. National Science Foundation-funded research, is detailed in the journal Nature. It could lead to smaller, more efficient quantum computers that operate by manipulating sound rather than light.

First proposed by Albert Einstein in 1907, phonons are packets of vibrational energy emitted by jittery atoms. These indivisible packets, or quanta, of motion manifest as sound or heat, depending on their frequencies.

Like photons, which are quantum carriers of light, phonons are quantized, meaning their vibrational energies are restricted to discrete values — similar to how a staircase is composed of distinct steps.

“Sound has this granularity that we don’t normally experience,” Safavi-Naeini said. “Sound, at the quantum level, crackles.”

Until now, scientists have been unable to measure phonon states in engineered structures directly because the energy differences between states — in the staircase analogy, the spacing between steps — is vanishingly small.

To address this issue, the team engineered the world’s most sensitive microphone, one that exploits quantum principles to eavesdrop on the whispers of atoms.

In an ordinary microphone, incoming sound waves move an internal membrane; this physical displacement is converted into measurable voltage.

Mastering the ability to precisely generate and detect phonons could help pave the way for new kinds of quantum devices that are able to store and retrieve information encoded as particles of sound, or that can convert seamlessly between optical and mechanical signals.

Such devices could be more compact and efficient than quantum machines that use photons, since phonons are easier to manipulate and have wavelengths that are thousands of times smaller than light particles.