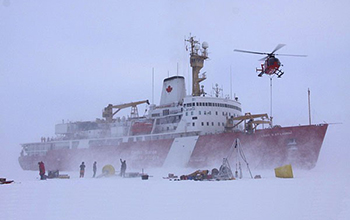 Melting of Arctic ice caused by climate change has exposed more sea surface to the atmosphere. Scientists have long suspected this trend would increase carbon dioxide in Arctic Ocean waters.

Now University of Montana researcher Michael DeGrandpre and an international team have determined that CO2 levels are rising in waters across wide swaths of the Arctic Ocean’s Canada Basin. However, some areas have slower increases, suggesting that other processes — such as biological uptake of CO2 — have counteracted expected increases.

The results were published in the journal Nature Climate Change.

DeGrandpre said the ocean measurements were taken while the Canadian icebreaker CCGS Louis S. St. Laurent was underway, sometimes crashing through ice one-to-two meters thick. DeGrandpre and University of Montana researcher Cory Beatty have participated in research cruises aboard the vessel since 2012.

“Because of the inaccessibility of the Arctic and the harsh work conditions, we need a world-class icebreaker to access these areas,” DeGrandpre said. “That has given us a high-quality, consistent dataset, which helped with this latest study. Most Arctic CO2 datasets are from infrequent cruises that do not visit the same locations from year to year.”

The new study combines sporadic data dating back to 1994 with the more frequent data the scientists have collected since 2012. DeGrandpre said that the consistent dataset will continue to improve. The National Science Foundation has awarded the team a grant to continue the icebreaker project through 2023.

“These findings underscore the value of international collaborations for working under harsh environmental conditions and supporting long-term observations to detect and understand changes in the Arctic Ocean,” said Roberto Delgado, a program director in NSF’s Office of Polar Programs.