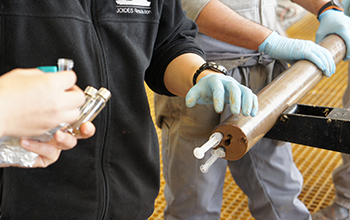 For decades, scientists have gathered ancient sediment samples from below the seafloor to better understand past climates, plate tectonics and the deep marine ecosystem. In a new study published in Nature Communications, researchers reveal that, given the right food in the right laboratory conditions, microbes collected from sediment as old as 100 million years can revive and multiply, even after being dormant since large dinosaurs prowled the planet.

The research team behind the new study, from the University of Rhode Island Graduate School of Oceanography, the Japan Agency for Marine-Earth Science and Technology, the National Institute of Advanced Industrial Science and Technology, the Kochi University and Marine Works Japan, gathered the ancient sediment samples during an expedition to the South Pacific Gyre. The gyre is the part of the ocean with the lowest productivity and fewest nutrients available to fuel the marine food web.

On the seafloor, there are layers of sediment consisting of marine snow (organic debris continually sourced from the sea surface), dust and particles carried by the wind and ocean currents. Small life forms such as microbes become trapped in this sediment.

Aboard the research drillship JOIDES Resolution, the U.S. National Science Foundation-funded team drilled numerous sediment cores 100 meters below the seafloor and nearly 6,000 meters below the ocean’s surface. The scientists found that oxygen was present in all the cores, suggesting that if sediment accumulates slowly on the seafloor at a rate of no more than a meter or two every million years, oxygen will penetrate all the way from the seafloor to the base.

Such conditions make it possible for aerobic microorganisms — those that require oxygen to live — to survive for geological time scales of millions of years.

“Investigating life in extreme environments and finding it in incredible circumstances such as shown here lends hope that we will find it beyond Earth,” says Jamie Allan, a program director in NSF’s Division of Ocean Sciences.

With fine-tuned laboratory procedures, the scientists incubated the samples to coax the microbes to grow. The results demonstrated that, rather than being fossilized remains of life, microbes in the sediment had survived.

“We knew there was life in deep sediment near the continents where there’s a lot of buried organic matter,” said URI co-author Steven D’Hondt. “But what we found was that life in the deep ocean extends from the seafloor all the way to the underlying rocky basement.”