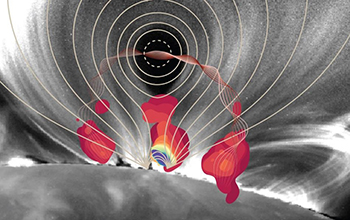 Findings based on observations of the event at microwave wavelengths

In a U.S. National Science Foundation-funded study published in Nature Astronomy, an international team of researchers has presented a new, detailed look inside the “central engine” of a large solar flare accompanied by a powerful eruption. The flare was first captured on September 10, 2017, by the Owens Valley Solar Array — a solar radio telescope facility operated by the New Jersey Institute of Technology.

The new findings, published in Nature, are based on observations of the event at microwave wavelengths. They offer the first measurements characterizing the magnetic fields and particles at the heart of the explosion. The results revealed an enormous electric current “sheet” stretching more than 40,000 kilometers through the core flaring region where opposing magnetic field lines approach each other, break, and reconnect, generating the intense energy powering the flare.

The team’s measurements also indicate a magnetic bottle-like structure located at the top of the flare’s loop-shaped base (known as the flare arcade) at a height of nearly 20,000 kilometers above the sun’s surface. The structure, the researchers suggest, is likely the primary site where the flare’s highly energetic electrons are trapped and accelerated to nearly the speed of light.

The scientists say the study’s new insight into the engine that drives such powerful eruptions may aid future space weather predictions for potentially catastrophic energy releases from solar flares — the solar system’s most powerful explosions, capable of severely disrupting technologies on Earth such as satellite operations, GPS navigation and communication systems, among many others.

“One of the major goals of this research is to better understand the fundamental physics of solar eruptions,” said Bin Chen, the paper’s lead author and a physicist at NJIT. “With this study, we’ve measured the details of the magnetic field of a current sheet for the first time, giving us a new understanding of the central engine of the sun’s major flares.”

Added Ilia Roussev, a program director in NSF’s Division of Atmospheric and Geospace Sciences, “The results of this research have yielded one more piece of the puzzle underpinning the fundamental physics involved in solar flares and associated phenomena. This study will enable scientists to model and predict solar eruptions more accurately in the future.”