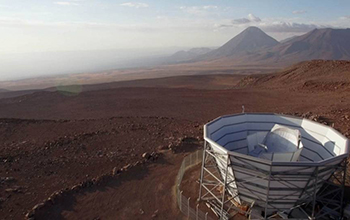 From a mountain high in Chile’s Atacama Desert, astronomers at the U.S. National Science Foundation’s Atacama Cosmology Telescope (ACT) have taken a fresh look at the oldest light in the universe.

The new observations, plus a bit of cosmic geometry, suggest that the universe is 13.77 billion years old, Princeton University and other scientists say. Two papers describing the new analysis have been published on the preprint server arXiv.

The ACT peers at the afterglow of the Big Bang. This light, known as the cosmic microwave background, marks a time just 380,000 years after the universe’s birth, when protons and electrons joined to form the first atoms.

If scientists can estimate how far light from the cosmic microwave background traveled to reach Earth, they can calculate the universe’s age. That’s easier said than done, though. Judging cosmic distances from Earth is hard.

So, rather than estimating how far light travels, scientists measure the angle in the sky between two distant objects, with Earth and the two objects forming an enormous triangle. If scientists also know the physical separation between those objects, they can use geometry to estimate the distance of the objects from Earth.

The results add fuel to a controversy that has arisen in recent years between two different ways of measuring the age of the universe: the method used in the current research, based on the cosmic microwave background; and an older method based on measurements of the recession of galaxies.

“The ACT result adds credence to the cosmic microwave background method, but there can still be systematic errors in both methods,” said Richard Barvainis, a program director in NSF’s Division of Astronomical Sciences. “These will need to be corrected before agreement is reached, and that is part of the excitement of scientific research — to find the right answers to fundamental questions.”