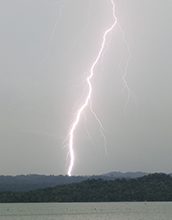 Scientists at the Smithsonian Tropical Research Institute in Panama have published dramatic maps showing the locations of lightning strikes across the tropics.

Based on ground and satellite data, the U.S. National Science Foundation-funded researchers estimate that more than 100 million lighting strikes on land each year radically alter forests and other ecosystems in the region between the Tropic of Cancer and the Tropic of Capricorn. The results appear in Global Change Biology.

“Scientists have a relatively good understanding of the physics of lightning, but its ecological importance has not been appreciated,” said Matt Kane, a program director in NSF’s Division of Environmental Biology. “This study used novel, high-tech sensors to reveal that forest trees, especially large ones, are particularly prone to death by lightning strikes. That needs to be taken into account when modelling the global carbon cycle.”

Because the ecological importance of lightning is so challenging to study, it has been overlooked as a change agent in tropical forests, where researchers often focus their energy on more obvious disturbances such as drought, fire and high winds.

“Lightning influences the ability of forests to store biomass, and therefore carbon, because it tends to strike the largest trees,” said STRI ecologist Evan Gora. “And lightning strikes may also be very important in savanna ecosystems.”

Based on satellite data about strike locations and on-the-ground effects of 92 lightning strikes, the scientists estimated that lightning damages some 832 million tropical trees each year. Roughly a quarter of the trees probably die from their injuries.

The researchers then asked whether there was a connection between the number of lightning strikes and the type of ecosystem, its biomass and climate variables such as rainfall and temperature. They found that lightning strikes were more frequent in forests, savannas and urban areas than in grasslands, shrublands and croplands.

Forests that experience more lightning strikes have fewer large trees per acre. “This is the best evidence to date that lightning is a major disturbance influencing tropical forest dynamics and structure,” said study co-author Helene Muller-Landau. “We suspect our study vastly underestimates the total effect of lightning. Lightning strikes may play a major role in forest biomass/carbon cycling not only in tropical forests but in other tropical ecosystems.”