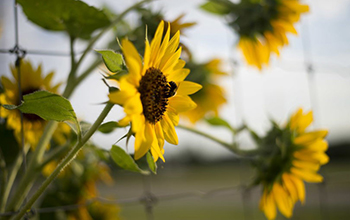 How do sunflowers manage to grow in the desert? Wild sunflowers display extensive variation, both between and within species. Scientists now report that variation is preserved by blocks of “supergenes” that allow adaptation to different environments.

This finding should improve breeding of the cultivated sunflower, considered one of the world’s most important oilseed crops.

The results of the U.S. National Science Foundation-funded research are published in the journal Nature. The report explains how distinct forms of plants are established and endure, and provides new details about how species arise.

Normally, genes are broken apart over generations by mating. The researchers identified so-called “supergenes,” sets of genes that are co-inherited as a block because of changes in chromosome structure. The supergenes enable sunflowers to adapt to a variety of environmental variables, including temperature, precipitation and soil fertility.

The study by University of Georgia and University of British Columbia scientists focused on three wild relatives of cultivated sunflowers.

“Beyond providing insights into how biodiversity arises and is maintained, this work has the potential to lead to the development of more resilient crop plants,” Burke said.

The researchers found genomic regions influencing traits of agronomic importance, such as the large seeds of dune-adapted populations, which can be as much as 60% larger than typical wild sunflower seeds — particularly valuable for a seed crop such as sunflowers.

“This study shows that in adaptation to hostile environments, it is not only important which genes a sunflower has, but also how these genes are organized on chromosomes — an unexpected additional complexity,” said Gerald Schoenknecht, a program director in NSF’s Division of Integrative Organismal Systems.