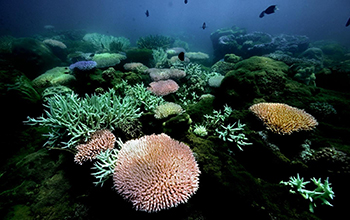 Coral reefs are dying at an alarming rate as water temperatures rise worldwide as a result of climate change, pollution and human activities. In the last three decades, for example, half of Australia’s Great Barrier Reef has lost its coral cover.

A new study by Columbia University scientists provides evidence that genetic sequencing can reveal evolutionary differences in reef-building corals. The revelations could one day help scientists identify which strains could adapt to warmer seas.

The findings of the U.S. National Science Foundation-funded research, published in Science, provide a window into the genetic processes that allow some corals to resist dramatic climate shifts. Understanding these processes could improve current preservation efforts.

“We need to use as many tools as possible to intervene, or we will continue to see coral reefs vanish,” said Zachary Fuller, first author on the study. “Using genomics can help identify which corals have the capacity to live at higher temperatures, and reveal the genetic variants associated with climate resilience.”

Coral reefs, found throughout the world in tropical oceans, are one of the most diverse and valuable ecosystems on Earth. Reefs provide habitat for a large variety of marine species; they protect coastlines from storms, floods and erosion; and they help sustain the fishing and tourism industries.

In the late 1990s, reefs experienced their first wave of mass bleaching, which occurs when high water temperatures destroy the symbiotic relationship with a colony’s colorful algae, causing the corals to turn white. The loss effectively starves them, as corals are dependent on the photosynthetic algae for nutrients. Reefs can recover from bleaching, but prolonged periods of environmental stress can eventually kill them.

The new research predicts, to some degree, which corals are likely to withstand unusually high temperatures and resist bleaching events.

“Genomics allows us to examine the differences that could influence survival and bleaching tolerance, helping us work out how we might support coral health,” said Molly Przeworski, senior study author.

Added Ted Morgan, a program director in NSF’s Division of Integrative Organismal Systems, “This study demonstrates the power of genomics research. Such approaches are critical to advancing our ability to predict biological responses to changing environments.”