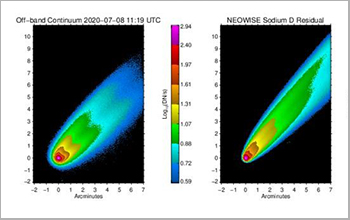 In early July, Comet NEOWISE approached the sun for the first time in nearly 4,500 years. For observers in the Northern Hemisphere, it is now faintly visible toward the Northwest after sunset. When viewed through binoculars its showy tail should continue to dazzle through at least July 22, when it passes a mere 100 million kilometers from Earth.

Comets are “icy dirtballs” and their tails are made of dust, gas and plasma (ionized gas). As comets approach the sun on their elliptical orbits, heat from sunlight causes the ice to turn into gas which drags material, called “dust,” from the surface of the comet as it escapes.

As sunlight reflects off tiny particles of dust, they pick up momentum and drift away from the sun. Heavier bits of dust are harder to push, and they drift more slowly. These forces affect the shape of the dust tail, very similar to the appearance of the comet to the naked eye.

Sodium tails have been observed only in very bright comets, such as Hale-Bopp and the sungrazer ISON, the astronomers said. While the element has been found in comets near the sun, images of the emission are relatively rare, since the glare of the sun makes it a challenging observation.

Morgenthaler and Schmidt plan to monitor the comet’s evolution as it races away from the sun. The team is now using computer models to simulate the comet’s sodium tail.