Ridgecrest earthquakes could cause a San Andreas chain reaction 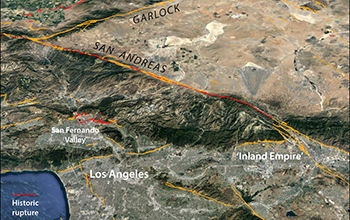 The 2019 magnitude 6.4 and magnitude 7.1 Ridgecrest earthquakes were largely unforeseen. They struck on faults that had not been mapped, and, in a rare order of events, the larger quake followed 34 hours after the smaller one. Fortunately, these large shocks occurred in the remote southern California desert, so they caused modest damage and no deaths.

But the Ridgecrest ruptures could have far-reaching effects because another fault — the Garlock Fault — links the Ridgecrest faults with the San Andreas Fault. What, if anything, can now be foreseen? That is the question addressed in a study by a National Science Foundation-supported startup, Temblor, published in the Bulletin of the Seismological Society of America.

In the 150 years prior to the 2019 Ridgecrest quakes, four shocks greater than magnitude 7.0 struck as far as 90 miles away. These quakes added stress to the newly discovered Paxton Ranch and the Salt Wells Valley Faults that would eventually rupture in 2019.

Now scientists at Temblor have developed a new method of forecasting future seismicity, the occurrence or frequency of earthquakes in a region. These forecasts are not earthquake predictions, which have so far proven impossible. Rather, they are probabilistic, framed in the language of chance. The researchers use past seismicity, stress from recent large and moderate earthquakes, and equations governing how fault friction varies in time and space to estimate the likelihood of future earthquakes.

More accurate methods of forecasting earthquakes allow communities and insurance companies to better understand and mitigate risk. Temblor scientists note that nearly all California insurance premiums are tied to earthquake rates estimated by an older model. The researchers say this study indicates that those benchmark probabilities are too low, affecting how homeowners and insurers assess risk and consequently, the price of homeowner insurance.

“Temblor’s work will enable a more accurate assessment of earthquake risk and insurance pricing with its new model that uses machine learning to forecast earthquake likelihood, location and severity,” said Andrea Belz, director of NSF’s Division of Industrial Innovation and Partnerships, which supports startups and small businesses with research and development grants.