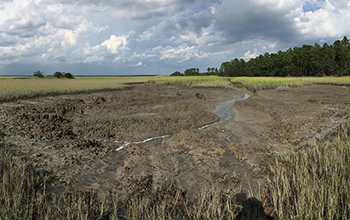 Crabs changing salt marsh ecosystems of the US Southeast

Researchers at Brown University and other institutions found that soils beneath salt marshes from South Carolina to Florida have been softened by higher sea levels and increased tidal inundation. That softening has allowed the burrowing crab Sesarma reticulatum to thrive, feeding on the cordgrass that holds the marshes together. The results of the National Science Foundation-funded research are published in Proceedings of the National Academy of Sciences.

The clearing of grass by crabs has altered the flow of creeks that run through the marshes, the study found, and is altering the dynamics between predator and prey species. The researchers say that Sesarma, which had previously been a minor player in southeastern salt marshes, can now be considered an ecosystem engineer, meaning that it plays a dominant role in shaping the ecosystem.

“What we’ve found is an example of how sea level rise can activate a species that’s now remodeling these salt marshes,” said Brown University ecologist Mark Bertness, a co-author of the research. “That’s a big deal because sea level rise is a pervasive global phenomenon, and this is a largely unexpected consequence.”

Elimination of grasses has increased the rate at which creeks form in the marshes and has also increased the drainage density of marsh creeks by up to 35%.

Sesarma activity is also influencing interactions between predators and prey in the creeks. Clearing of grasses provides predators with increased access to shellfish and other prey species. The researchers found that populations of mussels were dramatically lower in Sesarma-grazed creeks compared to creeks that weren’t grazed.

The fact that Sesarma is now altering the geomorphology of the marshes, as well as interactions between other species, is evidence that it now qualifies as an ecosystem engineer in southern marshes, the scientists conclude.