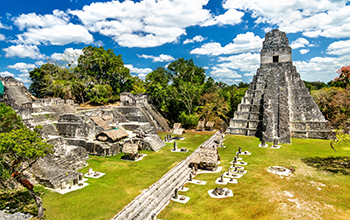 Issues with water likely cause of city’s abandonment, study suggests

Findings from research conducted by a University of Cincinnati team suggest that droughts in the ninth century along with pollution of reservoirs likely contributed to the depopulation and eventual abandonment of the ancient Maya city of Tikal. The research, supported by two National Science Foundation grants to investigate the water management systems used in Tikal, contributes to answering a long-standing question about why ancient Maya cities such as Tikal were abandoned.

The researchers found toxic levels of pollution in four central reservoirs in Tikal, a city that dates back to the third century B.C. in what is now northern Guatemala.

“The conversion of Tikal’s central reservoirs from life-sustaining to sickness-inducing places would have both practically and symbolically helped to bring about the abandonment of this magnificent city,” concluded the study, published in the Nature journal Scientific Reports.

The research team was composed of anthropologists, geographers, botanists, biologists and chemists. They examined layers of sediment dating back to the ninth century, when Tikal was a flourishing city.

The researchers sampled sediment at 10 reservoirs within the city and conducted an analysis on ancient DNA found in the stratified sediment of four of them.

A close examination of the reservoir sediment using a technique called energy dispersive X-ray fluorescence spectrometry found that mercury did not leach into the water from the underlying bedrock. Likewise, the researchers ruled out another potential source of mercury — volcanic ash that fell across Central America during frequent eruptions. The absence of mercury in other nearby reservoirs where ash would have fallen ruled out volcanoes as the culprit.

A geochemical analysis found that two reservoirs nearest the city palace and temple contained extremely high and toxic levels of mercury that the researchers traced back to a pigment the Maya used to adorn buildings, clayware and other goods. During rainstorms, mercury in the pigment leached into the reservoirs where it settled in layers of sediment over the years.

Researchers believe a combination of economic, political and social factors prompted people to leave the city and its adjacent farms. But the climate no doubt played a role, too, Lentz said.

“They have a prolonged dry season. For part of the year, it’s rainy and wet. The rest of the year, it’s really dry, with almost no rainfall. So they had a problem finding water,” Lentz said. The researchers’ abstract concludes with the statement that the combination of “severe pollution problems at a time when episodes of climatic aridity were prevalent … clearly threatened the sustainability of the city and likely contributed to its abandonment.”