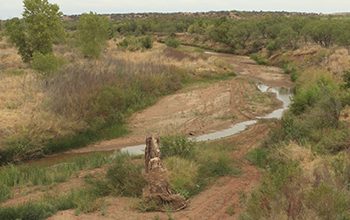 State will have hotter and drier conditions for decades to come

Texas’ future climate will have drier summers and decreasing water supplies for much of the remainder of the 21st century — likely resulting in the driest conditions in the last 1,000 years, according to research led by Texas A&M University scientists.

The National Science Foundation-funded research uncovered a clear message: Texas is getting hotter and drier.

Lead scientist John Nielsen-Gammon said data show that Texas was much wetter 10,000-15,000 years ago, at the close of the last ice age. Since then, the state’s climate has been similar to today’s, with the exception of some wetter and drier periods.

In the past thousand years, there have been multiple decades of extended drought periods called “megadroughts” — something Texas will likely see through the end of this century.

“Our study shows that the drier conditions expected in the latter half of the 21st century could be drier than any of those megadroughts,” Nielsen-Gammon said. The results are published in Earth’s Future.

West Texas is especially prone to drought or even megadrought conditions, according to the research. The future may bring other changes, such as “the dry conditions in West Texas slowly migrating toward East Texas,” said Nielsen-Gammon.

Added Betsy von Holle, a program director in NSF’s Division of Environmental Biology, “By predicting future environmental conditions as well as societal water needs, this team of researchers is communicating that we need to prepare for drier and hotter conditions in Texas.”