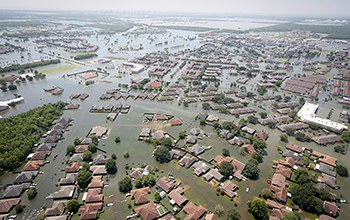 In the final 25 years of this century, changes in climate will intensify winds that steer hurricanes north over Texas, increasing the odds that Texas will see more fast-moving storms like 2008’s Hurricane Ike than slow-movers like 2017’s Hurricane Harvey, according to new research.

The National Science Foundation-funded study, published in Nature Communications, examined regional atmospheric wind patterns that are likely to exist over Texas from 2075-2100 as Earth’s climate changes due to increased greenhouse emissions.

The research began in Houston as Harvey deluged the city with 30-40 inches of rain over five days. Rice University researchers riding out the storm began collaborating with colleagues from Columbia University’s Lamont-Doherty Earth Observatory and Harvard University to explore whether climate change would increase the likelihood of slow-moving rainmakers like Harvey.

“We find that the probability of having strong northward-steering winds will increase with climate change, meaning hurricanes over Texas will be more likely to move like Ike than Harvey,” said study lead author Pedram Hassanzadeh of Rice.

Harvey caused an estimated $125 billion in damage, matching 2005’s Katrina as the costliest hurricane in U.S. history. Ike was marked by coastal flooding and high winds that caused $38 billion damage across several states. It was the second-costliest U.S. hurricane at the time and has since moved to sixth. Ike struck Galveston around 2 a.m. on September 13, 2008, crossed Texas in less than one day and caused record power outages.

Hassanzadeh said the findings don’t suggest that slow-moving storms like Harvey won’t happen in late 21st century. Rather, they suggest that storms during the period will be more likely to be fast-moving than slow-moving.

“This finding underscores the potentially far-reaching impact of global climate change on specific regions, especially those that are already vulnerable,” said Var Limpasuvan, a program director in NSF’s Division of Atmospheric and Geospace Sciences.