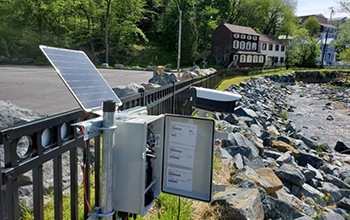 Ellicott City, Maryland, suffered devastating floods in 2016 and 2018. The disasters left residents and officials wondering how technology could help predict future severe weather, and save lives and property.

The University of Maryland, Baltimore County’s Nirmalya Roy received funding from the National Science Foundation to develop a rapid flood warning system for Ellicott City. The research was scheduled to conclude in August, 2019, but Roy and his team are continuing the work with support from NSF.

The researchers obtained sensor systems from Howard County’s Stormwater Management Division to deploy in Ellicott City. After installing the sensors in fall 2019, they moved on to the next phase — testing their performance, to prepare for the possibility of another flood.

The researchers also developed predictive algorithms and communication systems to provide real-time information to government officials about flood threats. And they can now compare data collected by the sensors with information from social media.

“Collaborating with multiple vendors who are designing and developing commercial flood monitoring systems helped the team understand the real challenges in the field,” says Roy. “That helped the research make meaningful differences for the Ellicott City community.”

The Flood Bot sensors detect and monitor water levels in the river as well as other information about weather, rainfall, and water levels at other nearby locations.

The data collected are available to the public through a Twitter account that is automatically updated twice each day. “The transmitted data are then combined with tweets from in and around Ellicott City to postulate the severity of a flash flood in the area,” says Roy.