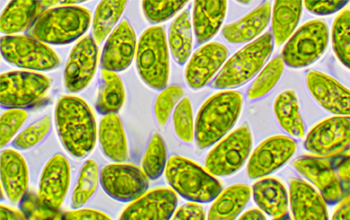 After drying out, resilient algae can start photosynthesizing again

Deserts of the U.S. Southwest are hot and dry — extreme habitats for most plants — but, remarkably, microscopic green algae that live there are extraordinarily tolerant of dehydration.

These tiny green algae are embedded in microbiotic soil crusts characteristic of arid areas. After completely drying out, the algae can start photosynthesizing again within seconds of receiving a drop of water.

How are they so resilient? That question is the subject of research by Elena Lopez Peredo and Zoe Cardon of the Marine Biological Laboratory. The results of their National Science Foundation-funded study are published in Proceedings of the National Academy of Sciences.

Working with two species of these microalgae, Peredo and Cardon studied increased and decreased gene activity during desiccation. And they added a twist. They also analyzed genes in a close aquatic relative as it dried out and ultimately died.

The research suggests that this new perspective on desiccation tolerance warrants more investigation in green plants.

“Comparative studies like this advance our understanding of how plants and animals deal with the challenges of changing and variable environments,” says Irwin Forseth, a program director in NSF’s Division of Integrative Organismal Systems.