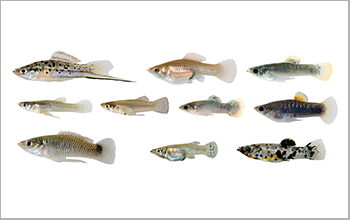 Using the same mechanism, several species of fish have adapted to harsh environments, calling into question the idea of evolutionary chance, according to a National Science Foundation-funded study by Kansas State University and Washington State University researchers.

Scientist Michi Tobler of Kansas State and colleagues published their results in Proceedings of the National Academy of Sciences.

“We are trying to understand how evolution and adaptation work,” Tobler said. “We stumbled across these fish living in highly toxic waters. The waters are so toxic they kill most other living things by binding to an enzyme in the mitochondria — the powerhouse of cells — and shut off energy production at the cellular level.”

The streams have high concentrations of hydrogen sulfide, a gas that is naturally dissolved in water. Tobler and his collaborators found at least 10 different lineages of fish that have adapted to life in this extreme environment.

“Whether populations take the same path to adapting to novel environments is a long-standing question in evolutionary biology,” Washington State University’s Joanna Kelly said. “Our research shows that the same pathways have been modified in multiple different species of hydrogen-sulfide-adapted fishes.”

All 10 adapted, regardless of location, using the same mechanism, tweaking enzymes so a toxicant can’t bind to them.

“The cool thing about these enzymes is that all organisms have them,” Tobler said. “We have them. Fungi have them. Plants have them. It’s the universal way to make energy. Yet, it is this ancient pathway that has been conserved for so long that it’s modified in these fish.”

Irwin Forseth, a program director in NSF’s Division of Integrative Organismal Biology, added that “this study was notable in its use of comparative biochemical, physiological and genomic approaches to reveal the evolutionary innovations that allow some organisms to adapt to extreme environments. That understanding is important to our ability to predict and manage biological responses to changing or stressful environments in the future.”