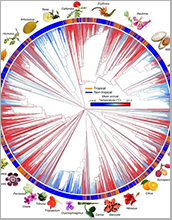 In a surprise twist, a major group of flowering plants is evolving twice as quickly in temperate zones as in the tropics. The finding runs counter to a long-held hypothesis that tropical regions, home to the planet’s richest biological diversity, outpace their temperate counterparts in producing new species.

“This research shows the potential of large-scale studies of the evolutionary relationships among plant species to yield important insights about how Earth’s biodiversity arose,” said Amanda Ingram, a program director in NSF’s Division of Environmental Biology.

The tropics are the birthplace of most species of rosids, a group that makes up more than a quarter of flowering plants, ranging from mangroves to roses to oaks. But in a National Science Foundation-funded analysis of some 20,000 rosid species, researchers found the speed of tropical rosid evolution lags far behind that of younger communities in temperate habitats.

Although rosids originated 93-115 million years ago, the rate at which the group diversified, or formed new species, dramatically increased over the last 15 million years, a period of global cooling and expanding temperate habitats. Today, rosids are diversifying far faster in places such as the southeastern U.S. than in equatorial rainforests, said study co-lead author Ryan Folk of Mississippi State University.

“Everyone knows about the diversity of tropical rainforests,” said Folk. “You would assume all the action in evolution is happening in them. But we found out that it is the temperate regions of the Earth — really our own backyards — where a lot of the recent action is taking place.”

A team of evolutionary biologists selected rosids as candidates for a closer look at the relationship between temperature and plant diversity in the first large-scale assessment of the group’s evolution. Comprising an estimated 90,000-120,000 species, rosids live in nearly all land-based habitats, with rosid trees shaping most temperate and many tropical forests, said study co-author Douglas Soltis of the University of Florida.

“To me that was one of the biggest terrestrial evolutionary events — the rise of rosid-dominated forests,” he said. “Other lineages, such as amphibians, insects and ferns, diversified in the shadow of rosids.”