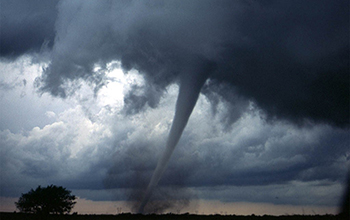 Advanced radar techniques may help distinguish which severe storms are likely to produce dangerous tornadoes, leading to more accurate warnings, according to National Science Foundation-funded scientists at the State University of New York at Stony Brook and their colleagues.

“Identifying which storms are going to produce tornadoes and which are not has been a problem meteorologists have been trying to tackle for decades,” said atmospheric scientist Scott Loeffler of Penn State. “This new research may give forecasters another tool to do that.”

Previous efforts using conventional radar struggled to distinguish between tornadic and non-tornadic supercells. But according to the researchers, in 2013 the U.S. upgraded its radar network to include polarimetric capabilities, which provide additional information about storms, including revealing the shape and size of raindrops.

The scientists analyzed radar data from more than a hundred supercell thunderstorms, the most prolific producers of violent tornadoes, and found a significant difference in the structure of storms that produced a tornado and those that did not.

Weather radar constantly monitors storms across the country, and data similar to those used in the study are readily available to operational forecasters who issue warnings, the scientists note.

“These findings have potentially large implications for the accuracy and confidence of tornado warnings and public safety during severe storms,” said Matthew Kumjian of Penn State and senior author of a paper in Geophysical Research Letters. “We look forward to getting this information in the hands of operational meteorologists to assess the impact it has.”

Tornado warning times have improved over the last several decades, thanks in part to numerical modeling research and intensive field campaigns, but decision-makers must often rely on available information such as radar data when issuing storm warnings, the scientists said.

The scientists compared areas with large, sparse raindrops and regions dense with smaller drops within supercell storms. The orientation of these two areas was significantly different in tornadic and non-tornadic supercells.

“The use of advanced radar techniques to assess the potential of supercell thunderstorms to produce tornadoes is a promising path forward for both the real-time prediction of hazardous weather and the fundamental science behind the question of why only some supercells become tornadic,” said Nick Anderson, a program director in NSF’s Division of Atmospheric and Geospace Sciences.