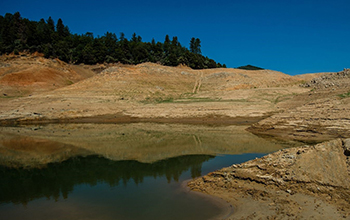 Drought may mean restrictions for watering lawns, crop losses for farmers and an increased risk of wildfires. But it can also hit power companies in the wallet.

In communities that rely on water for power generation, a drought can mean higher electricity costs linked to the loss of hydropower supplies.

In a recent study published in Environmental Research Letters, a National Science Foundation-funded team led by a researcher from North Carolina State University analyzed the effects of a drought in California. The drought happened from 2012-2016 and was one of the worst in the state’s history.

The scientists found that drought led to significant increases in power costs for three major utilities in the state.

Researchers developed a new software tool to model the economic and environmental impacts of the drought. California relies on hydropower to supply a significant portion of its power.

On average, the state uses hydropower to supply 13% of its energy needs. During the drought, there were lower levels of precipitation, melted snow and stream flow.

As a result, hydropower accounted for just 6% of the state’s electricity needs during the drought’s worst period. At the same time, increased temperatures led to a greater demand for power for cooling.

The researchers found that drought had a moderate impact on the market price of electricity. But it was actually another weather event that had a larger impact on costs. A 2014 extreme cold spell known as a “polar vortex” in the eastern United States led to increased prices for natural gas across the entire country.