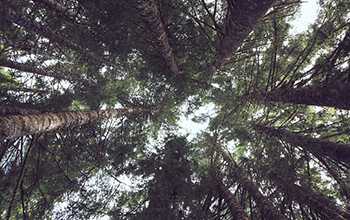 The world’s forests play an important role in mitigating climate change. Trees are carbon sinks — they absorb more carbon dioxide than they emit. But according to new National Science Foundation-funded research, the most prolific tree in North America, the Douglas fir, will absorb less atmospheric carbon dioxide in the future and therefore do less to slow climate change.

“More warming for trees could mean more stress, more tree death and less capacity to slow global warming,” said University of Arizona dendrochronologist Margaret Evans. Dendrochronology is the scientific method of dating tree rings, which can provide data on climate and atmospheric conditions. “Until now, forests have stabilized the climate, but as they become more drought-stressed, they could become a destabilizing carbon source,” Evans said.

Evans is senior author of a study published in Global Change Biology.

To study the impact Douglas firs could have on future climate, researchers gathered a massive amount of data to understand the relationship between tree-ring width and climate.

Tree rings are annual layers of growth made of carbon. When rings are thinner, that suggests the trees pulled less carbon dioxide from the atmosphere.

“We chose to study Douglas firs because they have a huge environmental niche,” Evans said. “Douglas firs grow in the western half of North America, ranging from as far south as the mountains of southern Mexico, to the mountain peaks punctuating the Sonoran Desert, to the Pacific Northwest rainforests, to the frigid peaks of the Rocky Mountains.”