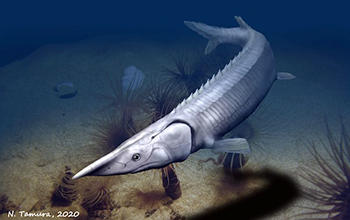 Sturgeon, long-lived, bottom-dwelling fish, are often described as living fossils. Their form has remained relatively constant, despite hundreds of millions of years of evolution.

In a National Science Foundation-funded study in the Zoological Journal of the Linnean Society, researchers led by Lauren Sallan of the University of Pennsylvania closely examined the ancient fish species Tanyrhinichthys mcallisteri. The fish lived around 300 million years ago in an estuary in what is today New Mexico.

The first fossil of Tanyrhinichthys was found in 1984 in a fossil-rich area called the Kinney Brick Quarry, about a half-hour east of Albuquerque.

Although the fish is similar to a sturgeon in its features, including its protruding snout, these characteristics evolved in a distinct evolutionary path.

The finding indicates that, although ancient, the features that enabledTanyrhinichthys to thrive in its environment arose multiple times in different fish lineages, a burst of innovation.

“Sturgeon are considered a ‘primitive’ species, but what we’re showing is that the sturgeon lifestyle is something that’s been selected for in certain conditions and has evolved over and over again,” says Sallan, senior author of the paper.

Many modern fish species, from the swordfish to the sailfish, have protuberant snouts that aid in their ability to lunge at prey. But this characteristic is much rarer in ancient fish.

At the time Tanyrhinichthys roamed the waters, Earth’s continents were joined in the massive supercontinent called Pangea, surrounded by a single large ocean.

Just before this period, the fossil record shows that ray-finned fish, which now dominate the oceans, were exploding in diversity. Yet, 300 million years ago, “it was like someone hit the pause button,” Sallan says. “There’s an expectation that there would be more diversity, but not much has been found, likely because there hasn’t been enough research on this time period.”

Aiming to fill in some of these gaps by further characterizing Tanyrhinichthys, Sallan and colleagues closely examined the fish and studied other species that dated to this period.

Long snouts in fish at that time appear to be an example of convergent evolution, or many different lineages all arriving at the same innovation to adapt to their environment.