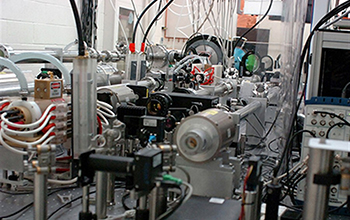 The images were obtained using the university’s chirped pulse, amplification-based, 50-terawatt Leopard laser. The modeling approach established in the new work could be used as a predictive tool to simulate radiographic images of complex 3D solid objects without carrying out radiation-based experiments.

A high intensity laser can produce an intense X-ray beam. Such laser-produced X-rays have been applied for recording X-ray images of various objects including a compressed laser fusion fuel, but a numerical tool for the quantitative comparison of a radiographic image has not been available until now.

“A challenge to a realistic simulation of laser-produced X-ray radiography is its spatial scale,” Sawada said. “To overcome this limitation, we separated modeling into two steps: X-ray generation is calculated with a fine resolution spatial grid, while computation of X-ray images is performed with a coarse grid to reproduce an X-ray image at a real experimental scale. A 3D computer aided design-like model of a test object allows us to directly compare experimental and simulated images.”

The National Science Foundation-funded work is published in the journal Plasma Physics and Controlled Fusion.

High-energy X-rays produced by intense short-pulse lasers interacting with a solid have been studied for a broad range of applications, such as basic plasma science, medical imaging, and industrial and national security applications. Laser-produced X-ray sources have the advantages of a small source size, short duration, high photon numbers and tunable X-ray spectrum compared to a well-developed X-ray tube, the scientists say.

“These researchers advanced development of predictive capabilities for X-ray radiography in ways that will pay dividends in both fundamental and applied research down the road,” said Vyacheslav (Slava) Lukin, a program director in NSF’s Division of Physics.