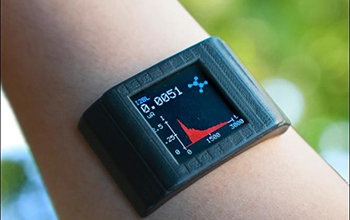 Thin film could upgrade a consumer smartwatch into a health monitor

Engineers funded by the National Science Foundation and affiliated with UCLA have designed a thin adhesive film that could upgrade a consumer smartwatch into a health-monitoring system. The system looks for chemical indicators found in sweat to give a real-time snapshot of what’s happening inside the body. A study detailing the technology was published in the journal of Science Advances.

Smartwatches can already keep track of how far you’ve walked, how much you’ve slept and your heart rate. Newer models even promise to monitor blood pressure. Working with a tethered smartphone or other devices, you can use a smartwatch to keep track of these health indicators over a long period of time.

What these watches can’t do yet is monitor your body chemistry. For that, they need to track biomarker molecules found in body fluids that are specific indicators of our health, such as glucose and lactate, which tell how well your body’s metabolism is working.

To address that need, researchers engineered a disposable, double-sided film that attaches to the underside of a smartwatch. The film can detect molecules, such as metabolites, and certain nutrients that are present in body sweat in very tiny amounts. They also built a custom smartwatch and an accompanying app to record data.

The skin-touching side of the adhesive film collects and analyzes the chemical makeup of droplets of sweat. The watch-facing side turns those chemical signals into electrical ones that can be read, processed and displayed on the smartwatch.

The researchers tested the film on people while sedentary, while doing office work and while engaged in vigorous activity, such as boxing, and found the system was effective in a wide variety of scenarios. They also noted that the stickiness of the film was sufficient for it to stay on the skin and on the watch without the need for a wrist strap for an entire day.