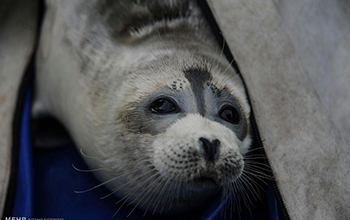 Disease outbreaks not confined to humans nor to life on land

People are beginning to understand, on a very personal level, the ways in which infectious diseases can devastate life. But disease outbreaks are not confined to humans nor to life on land.

Mass mortality events induced by infectious diseases afflict many species, including invertebrates, birds, fish, and land and aquatic mammals. However, in aquatic mammals, these events are understudied compared to their land-dwelling counterparts.

“We are perhaps more alert than ever to the catastrophic impacts of infectious disease in humans and in other animals,” said scientist Claire Sanderson of Virginia Tech. “Our task now is to understand what drives these events, particularly in species like marine mammals, where our knowledge is more limited.”

To help fill in the gaps, Sanderson worked with researcher and veterinarian Kathleen Alexander to evaluate the factors influencing infectious diseases in marine mammals. The biologists published the findings in Global Change Biology. The research was funded by the National Science Foundation.

Sanderson and Alexander defined a mass mortality event as a “devastating number of fatalities in the same species over a brief period of time.” In 2000, for example, more than 10,000 endangered Caspian seals died in less than a four-month span. Researchers later discovered that the culprit was canine distemper virus.

Mass mortality events can initiate a cascade with severe ecological consequences. Affected populations are often at a greater risk of local extinction, and changes in community structure can upset an ecosystem’s balance.

Sanderson and Alexander discovered that mass mortality events induced by infectious diseases between 1955 and 2018 occurred in 14% of marine mammal species. Viruses were responsible for 72% of these events and caused 20 times the number of deaths as bacterial outbreaks. Morbillivirus and influenza A outbreaks were the most common. Due to their life cycles, both viruses can infect multiple hosts since they have the potential for transmission between species.

“This study provides critical information about how often these types of outbreaks are happening, which will also help us better understand disease threats to humans,” says Sam Scheiner, a program director in NSF’s Division of Environmental Biology.