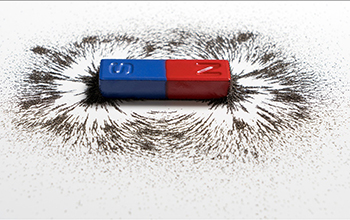 A team of Brown University physicists has developed a new type of compact, ultra-sensitive magnetometer. The new device could be useful in applications involving weak magnetic fields, the researchers say. The study was funded by the National Science Foundation.

“Nearly everything around us generates a magnetic field — from our electronic devices to our beating hearts — and we can use those fields to gain information about all these ‘systems,'” said Gang Xiao, senior author of a new paper describing the new device. “We have uncovered a class of sensors that are ultra-sensitive but are also small, inexpensive to make, and don’t use much power. We think there could be many potential applications for these new sensors.”

The new device is detailed in a paper published in Applied Physics Letters.

A traditional way of sensing magnetic fields is through what’s known as the Hall effect. When a conducting material carrying current comes into contact with a magnetic field, the electrons in that current are deflected in a direction perpendicular to their flow. That creates a small voltage, which can be used by Hall sensors to detect the presence of magnetic fields.

The new device makes use of a cousin to the Hall effect — known as the anomalous Hall effect — which arises in ferromagnetic materials. While the Hall effect arises as a result of the charge of electrons, the anomalous Hall effect arises from electron spin, the tiny magnetic moment of each electron. The effect causes electrons with different spins to disperse in different directions, which gives rise to a small but detectable voltage. The new device uses an ultra-thin ferromagnetic film made of cobalt, iron and boron atoms.

It doesn’t take a strong magnetic field to flip the spins in the film, which makes the device very sensitive — up to 20 times more sensitive than traditional Hall effect sensors, the researchers say.