The DNA that gave us 100 different kinds of tomatoes 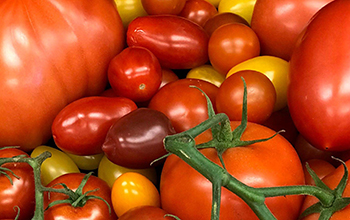 Analysis of genetic variation has uncovered 230,000 differences in DNA among varieties

A new analysis of genetic variation in tomatoes has uncovered more than 230,000 previously hidden, large-scale differences in DNA among varieties. As tomato plants evolved, segments of DNA were deleted, duplicated or rearranged. These genomic “structural variations” underpin much of the vast diversity in tomatoes, changing flavors, altering yield and shaping other important traits.

The results are published in the journal Cell.

The study, a National Science Foundation-funded effort led by Cold Spring Harbor Laboratory biologist Zachary Lippman and Johns Hopkins University biologist Michael Schatz, is the most comprehensive analysis to date of structural genome variation for a major crop, the researchers say. Breeders and scientists will be able to apply the information to breed or engineer new, more desirable plants with greater efficiency.

Large-scale differences between genomes, known collectively as structural variants, are likely responsible for a wide range of plant features that breeders care about, but these elements have been notoriously difficult to study, leaving much of the genetic basis of tomato diversity unexplained.

New DNA sequencing technology along with powerful new genome editing technology has recently made structural variants easier to detect and enabled the study of how they affect crop traits.

“There was a massive amount of natural genetic variation that we were blind to,” says Lippman. “The only way to get at it was through this new technology.”

The researchers sequenced and compared the genomes of 100 different varieties of tomato, including robust varieties suitable for industrial agriculture, succulent heirlooms and wild relatives of cultivated tomatoes.

“This research is a great example of the power of taking a comparative approach to functional genomics,” says Clifford Weil, a program director in NSF’s Plant Genome Research Program. “The wealth of structural variants in this one crop, and how much they explain the wonderful variety in traits we all love about tomatoes, is a fantastic toolkit for breeders and biologists alike.”