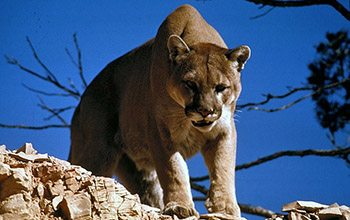 Territorial behavior in wildlife, for example, pumas scent-marking their domains, may help decrease the severity of a potential disease outbreak — but not without the cost of increased persistence of the disease within a population, scientists report.

The National Science Foundation-funded study was led by Lauren White of the University of Maryland and published in PLOS Computational Biology.

Infected animals can transmit a disease through pathogens left behind in their scent marks. By simulating animals’ movements across territories, the researchers were able to see how changing locations affected the spread of disease.

The scientists simulated a scenario conducive to a disease outbreak: a high density of animals and a slower disease-recovery rate (animals are sick for longer periods).  Territorial movements resulted in a lower number of animals who became infected, but the disease persisted longer in the population.

The results suggest that indirect contact among animals through behavior such as scent-marking could have a more important role in the transmission of disease than previously thought.

The findings also have implications for how disease spreads. The researchers are expanding their model by including other factors, such as habitat quality and prey kill sites.

“Territoriality is the animal equivalent of social distancing,” says Sam Scheiner, a program director in NSF’s Division of Environmental Biology. “Studying disease transmission in wildlife can provide new insights on how changes in behavior have critical effects on disease spread.”