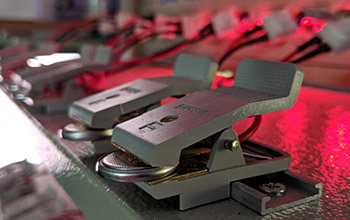 An unexpected property of nanometer-scale antimony crystals — the spontaneous formation of hollow structures — could help give the next generation of lithium ion batteries higher energy density without reducing battery lifetime. The reversibly hollow structures could allow lithium ion batteries to hold more energy and provide more power between charges.

Flow of lithium ions into and out of alloy battery anodes has long been a limiting factor in how much energy batteries could hold using conventional materials. Too much ion flow causes anode materials to swell and then shrink during charge-discharge cycles, causing mechanical degradation that shortens battery life. To address that issue, researchers have previously developed hollow “yolk-shell” nanoparticles that accommodate the volume change caused by ion flow, but fabricating them has been complex and costly.

Now, a National Science Foundation-funded team led by Georgia Tech researchers has discovered that particles a thousand times smaller than the width of a human hair spontaneously form hollow structures during the charge-discharge cycle without changing size, allowing more ion flow without damaging the anodes. The study was reported in the journal Nature Nanotechnology.

The researchers made their discovery using a high-resolution electron microscope that allowed them to directly visualize battery reactions as they occur at the nanoscale.

The team, which included researchers from ETH Zürich and Oak Ridge National Laboratory, also used modeling to create a theoretical framework for understanding why the nanoparticles spontaneously hollow — instead of shrinking — during removal of lithium from the battery.

Earlier work on related materials had been performed on larger particles, which expand and shrink instead of forming hollow structures.

“These are important research findings at the nanoscale, enabled by up-to-date instrumentation and infrastructure facilities,” says Larry Goldberg, a program director in NSF’s Directorate for Engineering.